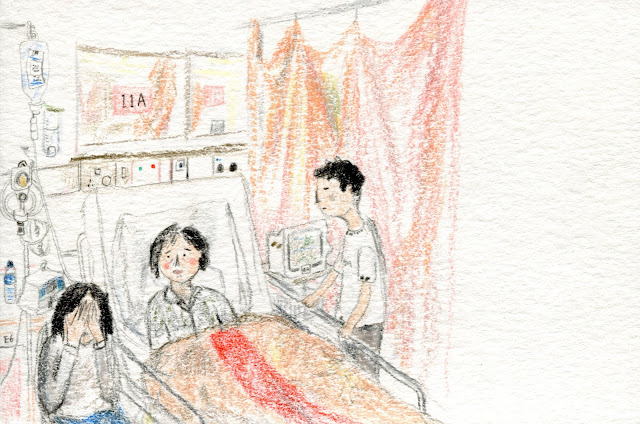 "One time she was watering a big plant, and wondered why the big plant's colour changed that morning, turned out it's the snake curling around the tree branch, and stuck its python head out when water sprinkled on him!
She threw the hose and ran away!"


A lot of people at where i live met and became friends because of dog walking, and among these friends some are the domestic helpers.
They have really interesting stories to share all the time. One of them used to work for a family here, but that family later moved to Clearwater Bay (the very very tip of it) , the dad of that family is around 60, but has hair dyed gold, and tattoos! So we secretly call him "the triad guy" even though he's actually very nice.
This helper jei jei moved to Clearwater bay with them, but later found a job in our neighbourhood again, we all thought it's cuz the family has 6 dogs and it's too much work, but it's NOT!!
She was telling me, "Sometimes during evening dog walks, snake pokes their heads out from the water drainage holes from the walls"

"Once a snake was too full after eating a cat, it can barely move, and blocked the village road, so they had to call the police to remove it"
NOT JUST THAT "They have a pond with fresh flowing water in their garden in clearwater bay, in March, the snakes wake up and are so hungry. One day, they saw frogs screaming and jumping out the pond, turn out this thick fat snake was swimming in the pond, the frogs escaped quickly, so the expensive fishes were swallowed instead, her boss was furious"
There are all kinda snakes in the neighbourhood, some as thick as the arm, and some as thick as the thigh XD
She worked for this family for 12 years, but at Clearwater Bay where they live, there are just way too many snakes.
She said from where they used to live, the closest bus stop is 15 minutes walk away, and also, at night there's no street lights! So sometimes you might accidentally walk into a snake. She also found an absolutely 未開眼 kitten before, which she nursed, and asked the family to keep, so the cat is all grown up now.

After hearing her story, I strongly think she should write about them, I will illustrate it for her. In fact, I just drafted the chapters for her XD
Posted by maomao at 2:12 PM 0 comments