Been back to HK for a bit more than a week, Christmas slipped away swiftly.
I was determined to work on my essay, in fact, I am still trying to finish the incomprehensible readings.  My parents were not at home today, instead of staying at home alone, I wandered off to Cyberport Starbucks, walked along the quiet bit of the park after buying the drink. Reading outdoor in mild weather, under the cloudy sky is really nice and appropriate. Even though there isn't the usual Starbucks Jazz music, but the sound of the birds singing replaced the stony silence, my only worry was whether I would be hit by birds dropping hark. 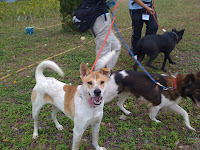 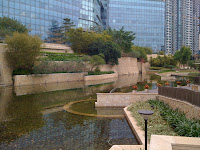 Went down to the park as I lose concentration, the park was full of dogs from other places on public holidays. Bumped into some friendly dogs from HKDR, and Lui Lui. Lui Lui's "mum" told me to go over to her place later on, to get some blueberry cheesecake she made! Haven't had good blueberry cheesecakes for a long time. 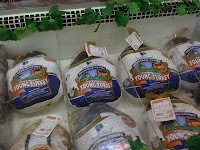 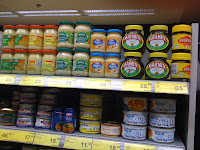 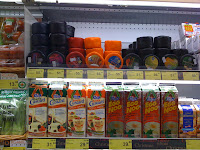 Also wanna mention the great variety of Cyberport Park n'shop. There's everything you imagine, it's like being in UK. They probably "sync" the stuff from Waitrose, there's even eggnog, vegemite, marmite, AND hallomi cheese! lol.
Posted by Maoshan at 5:55 PM 0 comments

I always wanted to go home sooner, but now, I feel very nostalgic! Which is expected.
I am going to miss this place and the people, and I am not even really leaving yet, it's like a preview of graduation. I love my coursemate, most of them are like genuine people from little village, some have pretty eyes, some walk really fast, some do really funny crits, most of them are really caring....

When we're sick of design, we order takeaway together and pretend the studio is the restaurant; we stood against the cold in Paris, and survived the year under Cary. We cook together to celebrate when crit's are over...

and it's not only my classmate, but also the place, the peaceful medieval city versus the grandiose Georgian town. People are generally sweet, the Starbucks people, the German Shepard that needs a wheel(chair), the old woman with her 9 month dog, Jane who i shadowed in Charlotte Square....
Why are people here so good, am I illusioned?
I am shattered
Me and my memories are shattered.
Posted by Maoshan at 4:41 PM 0 comments

Critical Hours of the morning 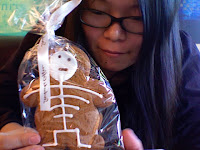 I'm in Starbucks again, like yesterday.
"I really love this CD, i wanna get this CD!" said one of the girl. ME TOO
9 am, Starbucks, the SAME people here as yesterday!!!! exactly the same people, I even know their names now.
3 American girls, on exchange, studying Vet here, one of the nicest girl is called Bethany. And an old man reading academic paper.
Their american accent is too strong...
Yesterday they gave out free gingerbread cookies. I must revise now. I can't wait till it's over
Posted by Maoshan at 6:00 PM 0 comments

In memory of Martin, that made math so much less dreadful (still dreadful, but less), especially comparing to oh gosh Ming in First year! Most of my really dear friends happen to be in this class as well!

Randomly thinking about LPC these days, I guess partly cuz I am speaking with contagious Holing often, so my procrastination centres around LPC memories. Maybe we should visit during winter break. and have Genki Sushi. Apart from the good and unique experience in LPC, some of the things I remember most vividly, are all the escapes we made, even though to terrible Sunshine City for Park n'shop sushi, omg, Leanne! I really wanna go back for some Cultural Evening, maybe in the coming semester. We need to think about how to get there though, as Holing and I both thought that the journey "back" to LPC on Sundays are really really dreadful!

It's snowing outside.
Posted by Maoshan at 5:28 AM 1 comments