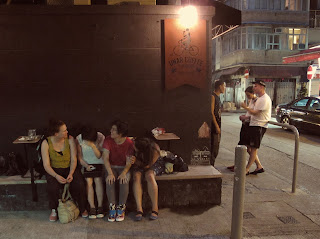 "At dawn the next morning on the train from Harwich to London it was beautiful to see the black fields and green meadows with sheep and lambs and an occasional thornbush and a few large oak trees with dark twigs and grey moss-covered trunks; the shimmering blue sky with a few stars still, and a bank of grey clouds at the horizon. Before sunrise I had already heard the lark. When we were near the last station before London, the sun rose. The bank of grey clouds had disappeared and there was the sun, as simple and grand as ever I saw it, a real Easter sun. The grass sparkled with dew and night frost. But I still prefer that grey hour when we parted. Saturday afternoon I stayed on deck till the sun had set. The water was fairly dark blue with rather high white-crested waves as far as one could see. The coast had already disappeared from sight. The sky was one vast light blue, without a single little cloud. And the sunset cast a streak of glittering light on the water. It was indeed a grand and majestic sight, but still the simpler, quieter things touch one so much more deeply."