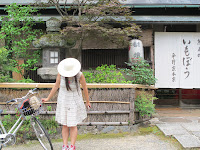 Parted with Choi Sz at Hiroshima. Currently at Kyoto, finally back to a place with wireless internet in the room. Staying in a Japanese style home here in Kyoto, there's a very beautiful cat here : )
Was planning to stay in Osaka last night, but after a series of battle around Osaka station yesterday evening, I decided to give up, and travel to Kyoto immediately. The station was filled with construction (just like Tokyo Station's endless renovation) - and people were running around catching trains (they knocked down my luggage twice) super scary! I thought I should be able to cope with all these very well, as I am from a BIG city (HONG KONG!!!) But it's just too scary, like a factory! So different from the peaceful hills I have been in the past week, where people all wear a smile on their face. (Everyone was sleeping on the train in Osaka). It's impossible to act like a flaneur wandering aimlessly in Osaka. Went back to Osaka Ikea this morning, I realize that, comparing to the many foreign cities I travelled to - Japan is one of the few places that I feel most like a "foreigner" even though I also have black hair and yellow skin, but there is just something different. Even the view from the JR trains, is so unique, both in a positive and negative way. There are always real surprises. It really feels like being in a foreign country.
Spent a day in Kyoto on bike, it feels so great biking around, but at the same time so dangerous! hahaa, my skills not too good!! Just remember that Phoebe used to bike to Minto house in first year, UNBELIEVABLE! I don't think it's true, it's probably a lie! Many people thought that I would like Kyoto, I am not too sure, but we will see!
There's also a very exciting discovery at Ikea today.
So many people wearing Yugata (the summer kimono) here in Kyoto, thinking whether to just stay in tonight! Don't want to go out until I get one!!

And.. a lot of business matter to deal with!
Let me say add oil to myself!
Posted by maomao at 5:21 PM