Picture Book: Now We Are Growing Up 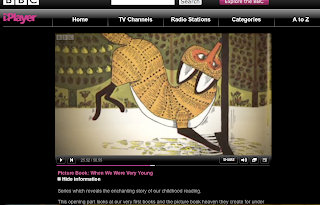 Series telling the enchanting story of childhood reading looks at books that help us with the growing pains of our early adolescence and teens.

Though words on the page begin to dominate, we still need strong visual imagery in books to understand darker and more complex worlds, as the magical interplay of words and pictures continues into early adulthood.

Now We Are Six

Series telling the enchanting story of children's books continues by looking at the time we first begin to read, and how the magical interplay of words and images continues to shape our childhood imagination.
From the age of six we want books to make sense of the middle years of our childhood as we go to school and make new friendships, a time when we love books full of fantastical worlds, a comforting place of talking animals, but also a frightening one of wild woods and giants.
The programme explores over 150 years of classic books, from Alice in Wonderland to The Wind in the Willows, from Winnie the Pooh to The Lion the Witch and the Wardrobe, and features interviews, readings and demonstrations of their art from leading writers and illustrators such as Philip Pullman, Jacqueline Wilson, Anthony Horowitz, Quentin Blake and Raymond Briggs.

When We were very Young

Series which reveals the enchanting story of our childhood reading.
This opening part looks at our very first books and the picture-book heaven they create for under-fives, exploring the magical interplay of words and pictures and how they begin to shape our childhood imagination.
Featuring favourites from The Tale of Peter Rabbit to Charlie and Lola, from Noddy to Thomas the Tank Engine, plus modern classics such as We're Going on a Bear Hunt and Each Peach Pear Plum.
There are also interviews, readings and demonstrations of their art from leading writers and illustrators including Michael Rosen, Shirley Hughes, Alan Ahlberg and Lauren Child.
Posted by Maoshan at 6:26 AM